Earlier when I was checking around for friends' posts and shares, I have found something really cool. It's a dear charming lady cosplaying the Poison Ivy from Batman, and seems she's also got some professional photography help. As said, the lady did the tight green spandex suit herself, with the boots, and her red hair looks exactly the same from the comic.

I can't wait to share the pictures with you, and see how true that the art's from life :) 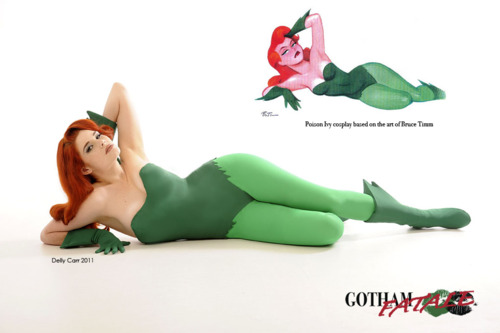 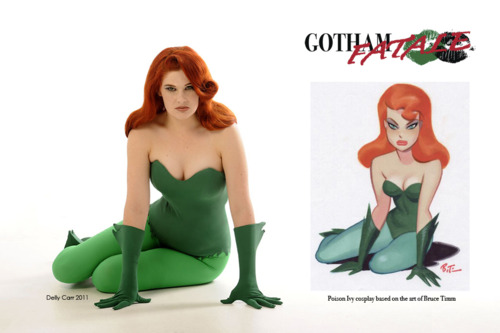 I feel the ending of the gloves is not so pointy, but overall this is really a great costume overall, and the poses piled together even make the thing more vivid :)

I do love batman movies, and have a black batman costume bought for my friend, a while ago. But I didn't read too much comics, and never thought about this costume. The photos here give me a great example, and maybe it's time to broaden the mind, and think up some really new ideas.
发帖者 Sunshine 时间： 上午7:08 2 条评论:

It has been a while since last time's login. By all means I have no intention to just stop this. There's an internet issue local(to our building only), because of the mass building - almost a complete turnover of the road ahead of this residence. The lines for everything almost got cut off for a while, here and there.

Winter comes and so does the big holiday of the year. I am too lazy to really purchase any gifts yet. Seriously, thinking about getting zentai suits as xmas gifts, to some friends who know this hobby of mine. I used to get the small size spidey suits and superhero costume to younger brothers, and they love it. However, tights are different story. I know a couple who have showed interests to the zentai photos I collected (I only have the healthy ones), and one group's a female encased in a zentai outfit, while decorated by two huge colorful(close to rainbow) wings at the back, and dance at the square. They look really cool.

So I am really hesitated, as I think they do have interest at this, but not sure whether they really want to wear one. The idea now is, if I go with this lead, I would send out the fantastic 4 suit as a trial - the dark blue spandex tight with the logo - which falls into the hero costume too.

Or, another idea is to go with those which look really unique, with the delicate camouflage. Maybe they would love it as a dance wear or something?
发帖者 Sunshine 时间： 上午8:08 1 条评论:

A Late Regards to Autumn and Thanksgiving Turkey

We don't really have Thanksgiving day here, but influenced by western culture, young people will take the chance to send thanks card around. We get three days off together with the weekend, because most of our clients enjoyed the holiday.

So I spent most of my time at home with the show The Big Bang Theory. There are a lot of things I never heard of, or don't understand, but the shows still keep me laughing. The interesting thing is, Leonard seems a more normal scientist type in my eyes, but I can't imagine the show without him. They are good friends and it's quite a pleasure to have friends like that - be what we are, enjoy what others are.


Winter's coming here, although there's often no snow at all, I still choose to stay at home most of the leisure time. Wearing a spandex zentai suit, without the hood on, reading, texting, twitter with friends, watching a couple of shows. Then I have reminded myself with some shows from last season of The Big Bang. I watched the one in which they all dress up as one of the superheros in movies, composed a team called Legal Justice of America, which including the flashman, his red suit with orange bright flash sign, the lantern man whose costume is a tight green costume, superman and supergirl costume with the cloak, and the aquaman - which really looks funny after dressing up.
The show reminds me of the skin-tight superhero costumes tradition in the comics and movies.
发帖者 Sunshine 时间： 上午11:31 没有评论:

Last weekend, actually two days ago, I got a call from a friend who worked at another city. We have been in the same class in university, and not from me, she's a big lover of our major, the literature stuffs. She's coming to this city to get dental treatment, because one of the best hospitals for that her. Talking about this, she's really unlucky - got a teeth problem when she was eight yrs old, got a treatment, and seems everything good ever since, except she often gets slight toothache around that. Then earlier - actually more than 10 yrs passed - she went to hospital to get a normal check, and the doctors there found half broken needle in her teeth. Does this sound like a story?

Lucky she get re-planted a teeth there - first time for me to hear that. Doctors found that if they insist to getting the needle out of the tooth, it won't work anymore either. If the surgery's successful, she could get a new tooth, just same as others, after three or four months.

It was a great pleasure to talk with her, and we had dinner at a Korean restaurant. Then on the street, we have found a couple - a man in black cloak, holding a handbang, and a girl in blue cheongsam style costume at the street. I am not sure what's going on - saw some people with pro cameras around, but there were a lot of people around. They kept walking towards to each other, and repeated that again and again.
This kind of ancient costumes are mostly decorated with a lot of embroideries, with a lot of headdress too. I love embroidery but this costume doesn't look best. Believe it or not, the buttons on the costume, are tailored by cloth, and there are over 100 ways to do them - different styles and all look great. Maybe next time I could think about getting an ancient style costume for cosplay, just a little bit expensive for really good ones.

Got a popup at skype today, yelling from an American friend who lives in HK, and now dating with a girl from mainland. As the girl really seems his cup of tea, he's serious and thinking about marriage too, in one year or two. Therefore he's slowly learning something about the mainland's marriage rituals, which tend to surprise him very often here and there. One thing is, the husband and his family needs to pay for most of the wedding fees. He's actually joking a lot about that.

It's so interesting to know something like this, the uniqueness of every different culture.


OK, the zentai's culture is, stay with zentai stuffs if you love it, and forget it when you don't. Never be bothered :) Secretly or publicly wearing zentai suits, the appearance of this fashion itself, is the signal of the enriched culture and more generous environment, so I don't have much complaints at this.
The unicolor zentai suits tend to be more classic, although they only have one color. My friend furryzentailover, has got two suits, one deep blue and another white mesh tight. He has compiled them together and we have some great photos related with zentai. With his approval, share the photos here.
This is the white mesh zentai suit's photo when it's worn together with black lace suit.

Halloween day's over but by the habit here, there's often more parties coming after. One interesting label we give these time-killer, is "warmth". At cold winter, getting together and dance or games with the music makes the time flies! I have got some ghost themes costumes this year following the oriental culture. They are scary and fun. 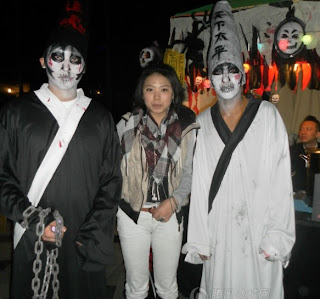 I shared an old ghost story with friends last night. Believe it or not, it was one of the most impressive for me. The plot is like this: once a family, married couple, and the husband's mother lived togeter at a big house in the countryside. The wife didn't enjoy the time with the old lady too much, because of the different interests, habits, etc. One day she went to market, and saw an artist selling his paintings at cheap price. There's one picture looking quite like the countryside they lived, and similar style house. She asked the artist to paint for her 12 more, following exactly the same environment, except that from the second painting, gradually you could see a graveyard at the mountain behind the house, slowly showed the corner of a chiffon, then more and more, then a ghost in ancient costumes, climbed out of it, and the last painting was showing the ghost lock at their own door. 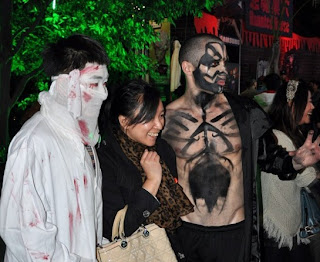 So after getting them, the wife hanged the first painting in the living room, her husband saw it too without comments. Then every week, she changed to a new painting, while her husband was away for work, then changed back after he's back home. His mother noticed the changes in the painting and was really scared, but every time her son told her it was alright.

So she has finally, picked up a night with thunderstorm, to show the final painting, then played a pre-recorded door knock sounds. These together scared the old lady to death. The wife paused the music, but the door knocks continued then the door opened and she saw the same ghost showed in the picture, standing at her door.

When the husband's back home, his mother has already left, while her wife went insane.

Is it scary? I actually got really scared when read it. But it's only story. In the oriental culture, we believe that we have no fear of ghosts, if we don't do anything wrong. 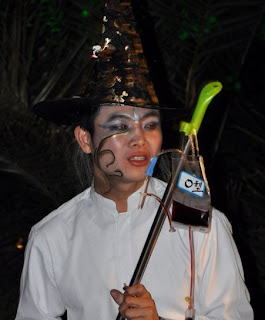 It's a pity that my morphsuit makes me very unique among these complex ghost halloween costumes, and they thought I am one kind of workers there, because the waiters and waitress were wearing green color too, just with hats and skirts. Anyway, I did have a lot of fun, so do my friends.
发帖者 Sunshine 时间： 上午5:45 2 条评论:

TV Shows and My Halloween Costume

I have watched a TV show called Lie to Me recent week, about how to tell the true from false and help quickly solve the problems. Although I have doubt about we could really see much and make very accurate decisions by micro-behaviors, I don't have any expert knowledge at that, so I can't judge. As a show for entertainment, it's fresh and unique subject for me. I used to watch the shows for fun mostly, such as The Big Bang. Although they are just stories, we could see how important it is to show our concern and love to those around us.

Halloween's coming with a few parties of different groups, and I will use this chance to spend more time with friends in reality. Besides work, I have really enjoyed a long house time with my books, magazines, zentai suits and laptop. I do talk with them through internet, check update at facebook. I have read at a glance of an academic paper about surfing internet and the result contains something like: as we put yourself at internet we tend to be less communicate at reality :) Maybe it's a chance to try it and see.

My final Halloween costume, which I probably will also wear once or twice for photos taking myself later, is finally a simple green lycra spandex zentai suit, and I drew a large smile face at the front of the suit, for fun. The lesson is when I have too long backup choices of shopping, I may easily forget these great choices at beginning, and do the easy and lazy way.
Related Posts: